Defences Down on Paradise

That Hotel Door – Is it Safe

So there we are in Thailand for some additional training in MuayThai the famous Thai boxing and some fun in the sun. Now this is often the time that your natural defences start to lower. A little bit f sun and a change from your usual routine and everything can seem so different.

As a trainer and coach to many large international businesses explaining how a little awareness training can ensure their teams can travel safely without incident it would be amiss of me to not constantly be recognising and assessing risk.

the sun and some fun training times with friends can make even the most experienced of us relax a little too much and that’s often when a bag snatch or something else equally as trivial can occur. A bag snatch in itself is inconvenient but if the victim makes the added mistake of defending their possessions it can also turn into something much bigger.

Anyway there we are in a very nice quiet location with a villa in the hills overlooking the sea. Well whats not to like about that?

So with everything going so well and exhausted from training and the heat it would be easy to miss the obvious.

Just have a look at the double doors of the villa. Spot anything? 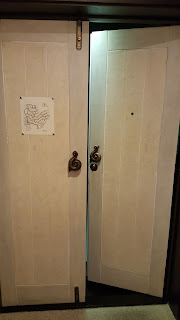 If you look at the very nice double doors you can see there are double bolts on the left side door and a latch on the right side door which fixes it to the left side door. Now one thing the doors do have is a spy hole so at least you can see who is on the other side. Both doors open outwards.
However you should be able to work out that with no chain or manual overlock anyone who slips the latch on the right hand door can simply walk into your villa. Not the best security in the world but likewise not the worst.
A simple method of overcoming most issues in many hotel rooms is to take a doorstop but as these doors open out that wont work here.
A simple method for additional security also has to be able to be movable in the case of fire or emergency so as in all things its about gaining an effective balance. In this case a simple belt can be used which if pushed strongly will stretch and release if  for some reason you are unable to undo it but with enough noise that anyone asleep inside would know if an intruder were entering the villa. 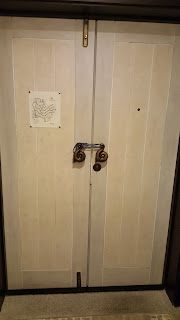